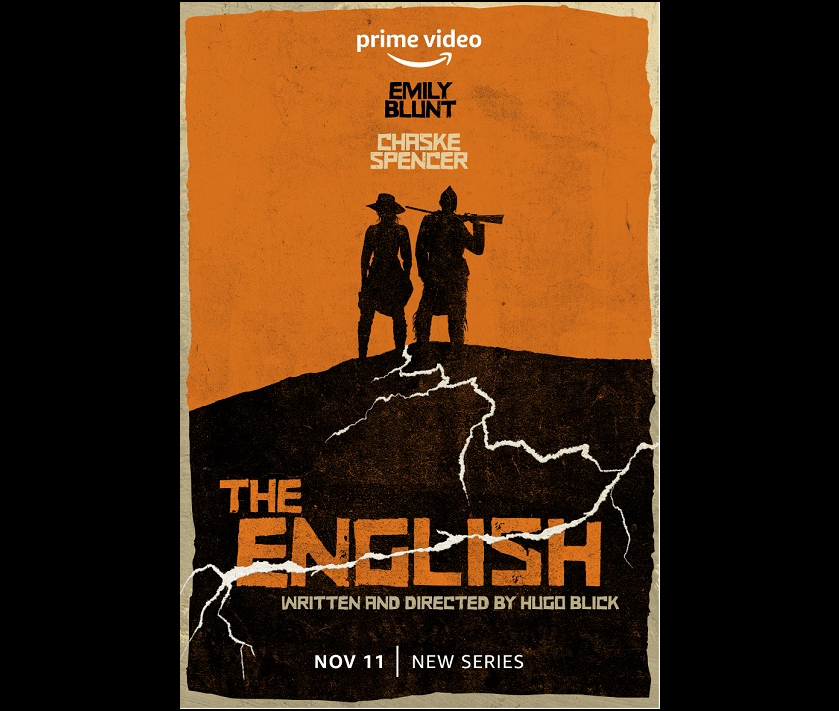 Prime Video debuts the teaser trailer and art for the upcoming Western drama series The English, starring Emily Blunt (A Quiet Place franchise, Sicario, Oppenheimer) and Chaske Spencer (Wild Indian, Echo), along with its premiere date. All six episodes of the limited series will premiere on November 11 exclusively in the U.S., Canada, Australia, New Zealand, and the Nordics on Prime Video, following its November 10 UK premiere on BBC Two and BBC iPlayer. Additionally, The English will make its world premiere at the BFI London Film Festival as their series special presentation on Sunday, October 15. The series is a co-production with Amazon Studios and BBC, in association with All3Media International who handled international sales.

The English is an epic chase Western, from award-winning writer and director Hugo Blick (The Honourable Woman, Black Earth Rising, The Shadow Line). The series takes the core themes of identity and revenge to tell a uniquely compelling parable on race, power, and love. An aristocratic Englishwoman, Lady Cornelia Locke (Blunt), and a Pawnee ex-cavalry scout, Eli Whipp (Spencer), come together in 1890 middle America to cross a violent landscape built on dreams and blood. Both of them have a clear sense of their destiny, but neither is aware that it is rooted in a shared past. They must face increasingly terrifying obstacles that will test them to their limits, physically and psychologically. But as each obstacle is overcome, it draws them closer to their ultimate destination – the new town of Hoxem, Wyoming. It is here, after an investigation by the local sheriff Robert Marshall (Stephen Rea, The Shadow Line) and young widow Martha Myers (Valerie Pachner, A Hidden Life) into a series of bizarre and macabre unsolved murders, that the full extent of their intertwined history will be truly understood, and they will come face-to-face with the future they must live. The series’ ensemble cast includes Rafe Spall (The Salisbury Poisonings), Tom Hughes (A Discovery of Witches), Toby Jones (Marvellous), and Ciarán Hinds (The Terror).

The English is produced by Drama Republic Ltd and Eight Rooks Ltd. The series is created by Hugo Blick – who also serves as an executive producer, director, and writer. Emily Blunt also serves as executive producer, alongside Greg Brenman (Peaky Blinders, The Honourable Woman) for Drama Republic. Colin Wratten (Killing Eve) serves as a producer on The English. Global distribution is handled by All3Media International.